Hey, referees. Remember years ago, when you used to show up at a match, went about your pre-match duties and focused on your responsibilities without worrying too much about scorekeeping? After all, referees had the “important jobs,” and scorekeeping was easy anyway, right?

Well, those days are long gone. It may have taken us years to realize how important scoring is to a match — arguably, some of us still may not realize it — but the state of our sport today requires referees to know the scoresheet just as well as the scorers who use it.

It’s no longer a matter of retrieving the lineup sheet from a coach and handing it to the scorer to record it. And although a lineup card may be used by the second referee in NFHS competitions, that lineup card is no replacement for the scoresheet — even though some of us may have tried to keep track of more match details than needed, including the score.

Keeping score has taken on a new level of importance

Modern volleyball has seen several important changes that have directly affected scoring. Among other things, we’ve increased the number of substitutions compared to the old days, and with the addition of rally scoring and the libero player, keeping score has taken on a new level of importance — so much so, that we now have a designated assistant scorer/libero tracker as part of the table crew. But how does all that impact a referee?

Adding another member to the scoring crew hasn’t lightened the responsibilities on the (second) referee’s shoulders. On the contrary, it has required referees to increase their scoring knowledge. Not only do we need to know and understand the scoresheet, we must now also know how to use the libero tracking sheet and understand its relationship to the scoresheet. There are two primary reasons for needing that increased scoring knowledge: • To properly train and prepare scorers/assistant scorers.

• To be able to quickly sort through the scoresheet to resolve an issue or discrepancy.

We are doing ourselves a disservice when we don’t spend adequate pre-match time with our scoring crew. Those pre-match instructions with the scorers, regardless of their level of experience, will help prevent problems during the match. It only takes one anxiety-filled delay, trying to work through the scoresheet, to learn that many scoring errors are preventable and to realize that we don’t want to go through that again.

Resolving a scoring issue during a match, under pressure, with everyone watching and waiting, can frazzle the best of referees. The best way to efficiently handle that task is to have a working knowledge of the scoresheet ahead of time. In other words, all referees should also be functional scorers. That doesn’t mean we need to be as efficient as a veteran scorer, but we still need to have good knowledge of the scoresheet and scoring procedures. There is a “flow” to keeping score — a series of patterns for recording served points, points earned by the receiving team and substitutions, among other things. Knowing that “flow” helps you retrace the steps leading up to a scoring discrepancy.

Learning to keep score takes practice. It’s one thing to read about scoring procedures or to look through a scoring example in a book, but it’s another thing to keep score during a live match. The good news is that it’s easy for us to increase our scoring knowledge and there are lots of opportunities to do it without the pressure of being the official scorer for the match.

When you’re working at a USAV tournament, go to a court during one of your breaks, take a blank scoresheet and sit somewhere courtside and keep score. Have a veteran scorer or referee review your sheet and offer comments.

If you’re a referee for a high school varsity match, show up early and keep score during the junior varsity match. Again, you can do that courtside without sitting at the scorer’s table. After the match, compare your scoresheet to the official scoresheet if possible. That’ll give you an idea of how you’re doing.

Preseason collegiate tournaments offer an opportunity to keep unofficial score, too. There are often three or four referees assigned to a tournament, so when you’re not working a match, keep score. Again, compare your sheet to the official scoresheet after the match. You might also print a few scoresheets, attend a collegiate match as a spectator and keep score while you’re in the stands.

Libero tracking can be done unofficially.

Libero tracking can also be done in an unofficial manner as well, the same as scoring. You’ll learn how difficult it is to watch both sides of the court for libero replacements while also recording substitutions or assisting the scorer.

That practical experience, gained by keeping the score at a match from time to time, will help you work with scorers more effectively because you’ll have a working knowledge of the scoresheet. You’ll be able to speak their language, you’ll be better equipped to answer their questions and you’ll have a foundation for working through a scoresheet in the event of an error or discrepancy. And perhaps most importantly, you’ll get a feel for what it’s like to be a scorer who is trying to keep up with the referees’ pace and tempo. We don’t realize how little time we’re actually giving a scorer to record substitutions, for example, especially when there are multiple substitutions during the same dead ball.

So, if you aren’t already a functional scorer, now is the time to learn. The sport has progressed to the point that for us to be our best, we need to raise all facets of our game. Don’t leave scoring off the list. Referees need to be scorers, too.

Discreet Signals and Teamwork To Get Out of Hairy Situations 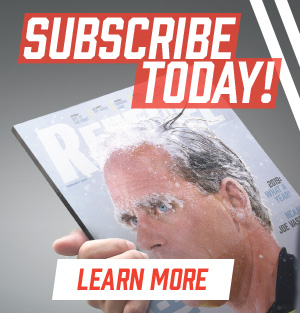 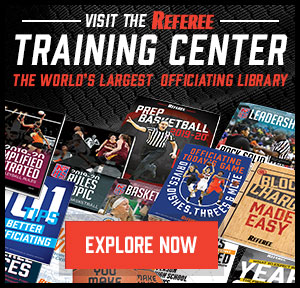 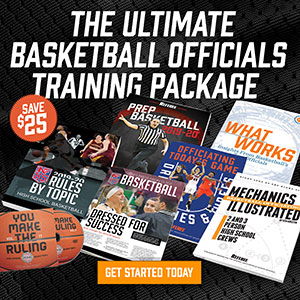 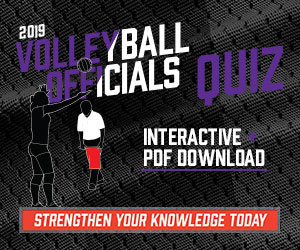